Who is Andra Day?

Born on December 30, 1984, Andra Day is a famous singer, songwriter, and actress.

She is well known for her hit song “Rise Up” and her album “Cheers to the Fall,” She even got nominated for Grammys.

Similarly, she won a Golden Globe Award for Best Actress in a Motion Picture-Drama in the biopic United States vs. Billie Holiday.

Today, we will be talking about Andra Day’s age, height, career, relationship, net worth, and even more in this article.

Andra Day was born on December 30, 1984, and her birthplace is located in Edmonds, Washington D.C.

Her family moved to South Carolina when she was just three years old.

Thus, Andra spent her whole childhood growing up in Southeast San Diego, California, with her family.

She started singing at a very young age and used to sing in the First United Methodist Church in Chula Vista, California.

Similarly, she took dancing classes at just five, which she did till her 20s.

Regarding her education, she attended Valencia Park Elementary School, which she gives high credibility for manifesting her interest in arts.

She got exposure to the music of famous jazz vocalists such as Billie Holiday, Elia Fitzgerald, and Dinah Washington at the age of 12.

It made her grow interested in music, too, and she started counting them as her idols.

Talking about her further studies, she went to the San Diego School of Creative and Performing Arts in Paradise Hills, and she graduated from there in 2003.

Delta Sigma Theta sorority announced her as its honorary member on July 11, 2019.

Now, let’s talk about the career of Andra Day and the achievements she has made so far.

What is Andra Day famous for?

Andra started doing the job of a children’s entertainer and other 20 jobs right after her graduation.

During the time of 2010, she was noticed performing at a strip mall by Stevie Wonder’s former wife, Kai Millard.

Kai then introduced Andra to her former husband Stevie Wonder, and then Stevie introduced her to producer Adrian Gurtviz.

Gurtviz even collaborated with her on her debut album a few years later.

In 2011, Andra signed a development deal with Buskin Records and hired Jeffry Evans as her manager later in 2013.

She then started making unplugged mashups and covers at her YouTube channel, which eventually grew her fame and name around.

Some of her hit covers are Mamma Knows Best by Jessie J, Eminem’s Lose Yourself, Muse’s Uprising, and many more.

With her increasing popularity, Andra and Jeffry got a record deal with Warner Bros. Records.

She worked on a total of 40 original songs with her manager Gurtviz.

In the Sundance Film Festival of 2014, Day’s performance grabbed the attention of the director, Spike Lee.

He offered to help her with the music video production of her single Forever Mine.

In 2015, she also got to perform at BET Awards and in the closing ceremonies of the Special Olympics.

The same year, she performed at Essence Music Festival and different TV shows such as Jimmy Kimmel Live!, Good Morning America, and many more.

On August 28, 2015, Andra released her first album, Cheers to Fall, and gained massive popularity with it.

The album was a huge hit, earned several critical acclaim and praises.

Likewise, the album peaked at number 48 on the Billboard 200 list.

Rise Up was even used in the ad for Beats by Dre, featuring the famous tennis player Serena Williams.

In November and September of 2015, she sang Wonder’s song Someday at Christmas in an Apple TV Commercial alongside Stevie Wonder.

Then, in 2016, Day started her Cheers to Fall tour in her hometown, San Diego.

She also performed on the Second Day of the 2016 Democratic National Convention in Philadephia and joined the Mothers of the Movement.

In December of 2016, Day won the Powerhouse Award at the Billboard Women in Music event.

The following year, she was featured on the song Stand Up for Something with rapper Common for Marshall’s American legal drama film.

It was nominated for the Academy Award for Best Original Song and Day, and Common got to perform at the 90th Academy Awards in March 2018.

On March 24, 2018, she performed for Baltimore Children’s Choir for the opening musical performance at the March for Our Lives rally in Washington, D.C.

Day had her debut in the acting industry after she got to play the role of Billie Holiday in the biographical drama The United States vs. Billie Holiday.

She even won the Golden Globe for Best Actress-Drama for her performance in the movie.

Reportedly, she lost about 40 pounds for the role of Billie Holiday.

She maintained a super healthy diet and decreased her calorie intake to lose all the pounds.

You can see a tiny scar on her chest in the photos and videos. Many people are curious about it. However, Day has not revealed anything about it.

As for her zodiac sign, she is a Capricorn. She has brown colored hair and gray colored eyes.

Regarding her nationality, she is an American and African-American by ethnicity.

We have no information about the religion Andra follows.

Many fans love this talented artist’s beautiful features, and she is also seen doing modeling gigs for brands.

Who is Andra Day dating as of 2021? Andra Day is currently single and not dating anyone as of 2021.

Also, we have no information about the past relationships of Andra.

So, speaking of the present, Andra is single, not married, not engaged, and reportedly has no babies.

Andra Day has not revealed anything about her parents in the media, like their names, whereabouts, and profession.

As for her siblings, it is known that she has a sister. But the name and career path of her sister is still unknown.

Net Worth of Andra Day

What is the net worth of Andra Day? Andra Day is a bonafide singer and aspiring actress.

She has been hardworking and earning money since her teen days.

Also, she has worked on many songs, albums and has done several modeling gigs.

With her excellent performance, she has won many prestigious awards and was nominated for some too.

As of 2021, her net worth is estimated to be $4 million approximately. 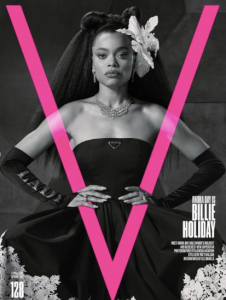 Check out the music video of Andra Day’s song Rise Up down below: