Axel Auriant is a French drummer and actor. He was born on January 1, 1998. Axel is currently 23 years old and was born in Besancon, France. He is famous for his role as Lucas Lallemant in the series Skam France. Axel currently lives in Paris, France.

He is popular not only in France but all around the world which is why he has gathered so much fan following worldwide. Due to this, he has a social media fan following of over 500,000 to date.

Where was Axel Auriant born?

In 1998, Axel Auriant was born in Besançon, France.  His early life is unknown to date. Axel has not revealed much about how he was born and raised and what he wanted to become growing up.

Regarding education, Axel has not revealed where he got his education. But we can clearly notice he has got proper education and comes from a decent family.

What is Axel Auriant famous for?

Axel Auriant is a famous French drummer and actor. He is famous for his role as Lucas Lallemant in the series Skam France.

In 2010, Axel made his theatre debut, joining the company “The Dirty Kids”, a professional company composed entirely of children.

He met Olivier Solivérès, author and director in the theater who allowed him to play a few years later in his creation In the Land of Santa Claus at the Mathurins theatre for 2 years.

Axel Auriant decided to become an actor at the age of 16. He was inspired by Molière’s study in French.

In the class of Émilie Anna Maillet, Axel joined the conservatory of drama in the 19th arrondissement of Paris in 2016.

Axel Auriant made a name for himself in the theatre at the age of 19. He played Cédric Chapuis’s ‘A Life on the Move’, for more than a year at the Tristan-Bernard Theatre. The show won the Star du Parisien for best play of 2017.

He is famous for his role as Lucas. Axel played the role of Lucas Lallement in the French adaptation of the series Skam. His character gets the lead role in the third season of Skam.

This season airs in 2019. The third season was very popular and from this season, Skam became the most-watched digital fiction in France. This series also drives Axel Auriant and his partner Maxence Danet-Fauvel to international popularity.

At the same year, Axel began playing Les 1001 Vies des Urgences at the Théâtre des Aries Paris, directed by Arthur Jugnot and is adapted from the novel So Voilà by Baptiste Beaulieu.

During the 30th night of Molières 2020 at the Théâtre du Châtelet, Auriant plays an extract from this show. Axel Auriant has performed more than 500 performances in the theatre. at the age of 21.

Axel Auriant is also a professional drummer in addition to his acting career. He started drumming in 2003. Auriant has accompanied several artists like Joyce Jonathan, Nicoletta, and Manu Dibango in some concerts.

Axel Auriant is now 23 years old. He stands at a height of 5 ft 8 inches tall and weighs about 70 kgs. His zodiac sign is Capricorn. His hair is light chestnut brown in color.

Axel’s other educational background including his high school and graduation is still unknown. 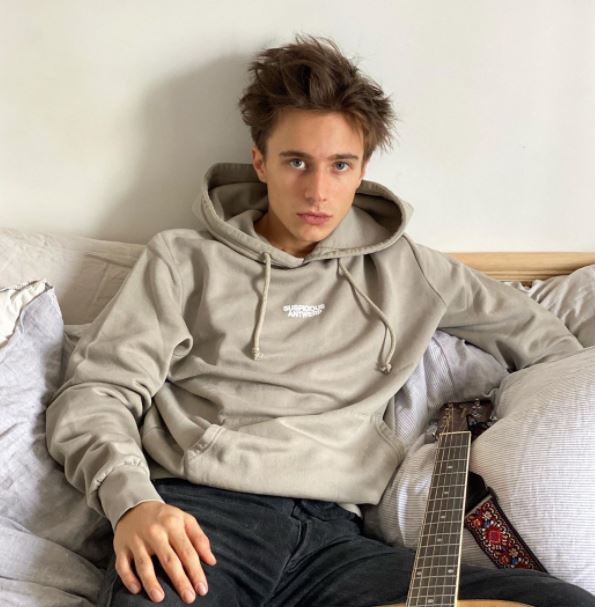 What are the hobbies of Axel Auriant?

The favorite book of Axel is Dead Souls and his favorite sport is Basketball. Axel’s favorite movie is City Lights released in 1931.

We do not Axel Auriant’s relationship with any person. He does not want to reveal his relationship (if he has any) and keep his life private.

But we do know that he was romantically involved with Manon Gillier from 2019 to 2020. Currently, Axel is just single. He is not engaged, married, or has any child.

Axel Auriant was born in Besançon, France, and currently lives in Paris, France. He was born to his father (name still unknown) and his mother’s name is also unknown.

The information about his other family members, brothers, sisters is unknown.

What is the net worth of Axel Auriant?

His primary source of income is from his acting career. Axel’s net worth as of 2021 is about to be 1 Million USD to 5 Million USD.