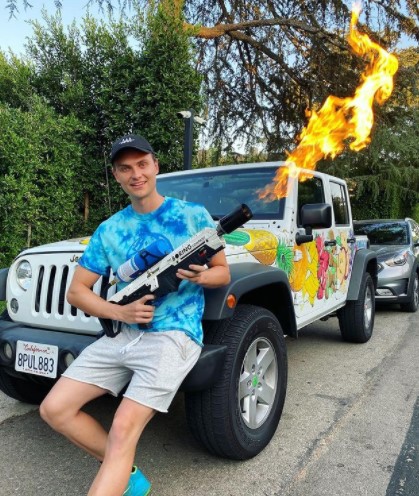 Who is Carter Sharer?

Carter Sharer ( Born October 23, 1993), is an American YouTuber who does prank videos and comedy sketches online.

The influential YouTuber has lots of fans across social media.

Where was Carter Sharer born?

Carter Sharer was born in Oakton, VA, North America on the 23rd of October, 1993.

From an early age, sharers was an innovative and curious child.

At the age of 11, he received a welder for his birthday, which helped him to become a self-trained welder.

Reportedly, Carter made his own engine-powered device including go-carts and hovercraft.

The content creator graduated from the prestigious ‘Oakton High School’ in 2012.

After, he enrolled in Carnegie Mellon University, where he earned a degree in Bachelor of Science.

Carter has an official Instagram account named ‘carter sharer, which has a massive following of 771 thousand followers.

Currently, the has posted about 733 posts and is following 691 people.

Sharer’s official TikTok channel is named ‘realcartersharer’, which has an impressive 5million followers.

He tweets about updates and funny stuff.

What is the most-watched video of Carter Sharer?

The content creator does have an official YouTube handle named ‘Carter Sharer’, which has an impressive 7.66 million subscribers.

He started his YouTube career on September 24, 2009, when he uploaded his first vlog titled ‘My First Vlog-(Carter Sharer).

His most-watched content is named ‘LAST TO BREATHE WINS $10,000’, which has a massive 28 million views.

Why is Carter Sharer famous?

Carter started his online Journey Via YouTube in 2009, where he collaborated with his brother and friend Lizzy.

They did a famous video called ‘Ninja Weapons Soda Drop Test’ which became a hit and was followed by more similar videos.

After some time, carter began to post vlog comedy sketches.

Sharer’s channel gained more relevance when he uploaded ‘RC Car Drives on Pool’, which was posted on December 21, 2017.

The famous vlog got millions of views and as of 2021, it has over 12 million views.

From 2017 to 2018, he used to do vlogs with his brother Stephen Sharer, where they were known as sharer bros.

Carter was living in the famous ‘Sharer Fam House’ where he did videos with Fidget  Spinners and slime.

In 2018, sharer revealed that he would be moving out of Sharer Fam house, and went to Los Angeles.

He moved to a big mansion in a big neighborhood called ‘Holmby Hills, which is also called ‘Team Ram House’.

In TRH he did many vlogs and the famous 24-hour challenges with his friends.

Carter has also been involved with his car being infamously spray-painted, which he later suspected his friends.

His 1 million USD car was also stolen but in the end, it was revealed to be a prank by his friends.

As of 2021, Carter Sharer has not been involved in any controversies as he likes to keep his personal and professional life clean.

He keeps a positive attitude towards his friends and lifestyle.

What is the height of Carter Sharer?

The famous YouTube currently stands at 5 feet and 10 inches tall, equivalent to 1.7 Meters.

Sharer belongs to American Nationality and he is of White Caucasian Ethnicity.

Carter is currently 27 years of age. Furthermore, he has natural blond hair and big blue eyes.

He has a lean average built and has handsome facial features.

Who is Carter Sharer dating now?

The famous YouTuber is in a rumored relationship with popular entertainer ‘Lizzy Capri’.

The famous couple met in 2012, where they were just friends.

Reportedly, they started dating after working together for many years.

Lizzy and sharer have adopted a pair of puppies together and name them ‘Milli’ and ‘Otter’.

The pair reportedly broke up once in 2019 but got back together after some time.

Carter and Lizzy often appear on each other’s channels and hugely support each other.

However, neither of them has officially disclosed their dating life as they want to live in privacy.

The identity of Carter’s father and mother’s names are not available on the internet.

Reportedly, his father is a well-established lawyer, whereas his mother is an artist, who does oil paintings to create artistic designs.

Sharers grew up with a brother named Stephen sharer and a sister Grace Sharer.

Stephen like his brother is also a social media star and sometimes collaborates with his brother for content.

Further information about his family is not expressed by the YouTuber, as he wants to keep their name away from the limelight.

What is the net worth of Carter Sharer?

Carter Sharers is worth approximately 2.6 Million USD, as of 2021.

Being one of the famous faces on the internet, sharer has lived a fabulous life.

With his earnings sharers owns two Lamborghinis and a red Ferrari.

The 27-year-old social media star has lived an awesome life and made some edgy content.

Let’s look at some of his trivia and interesting life.