Who is David Dobrik?

David Dobrik (born 1996, July 23) is the co-founder of the app Disco and a YouTuber as well. He is also a popular podcaster and social media influencer.

Dobrik got into the limelight from his comedy skits in Vine. However, he became popular when he joined the group of popular YouTube vloggers. 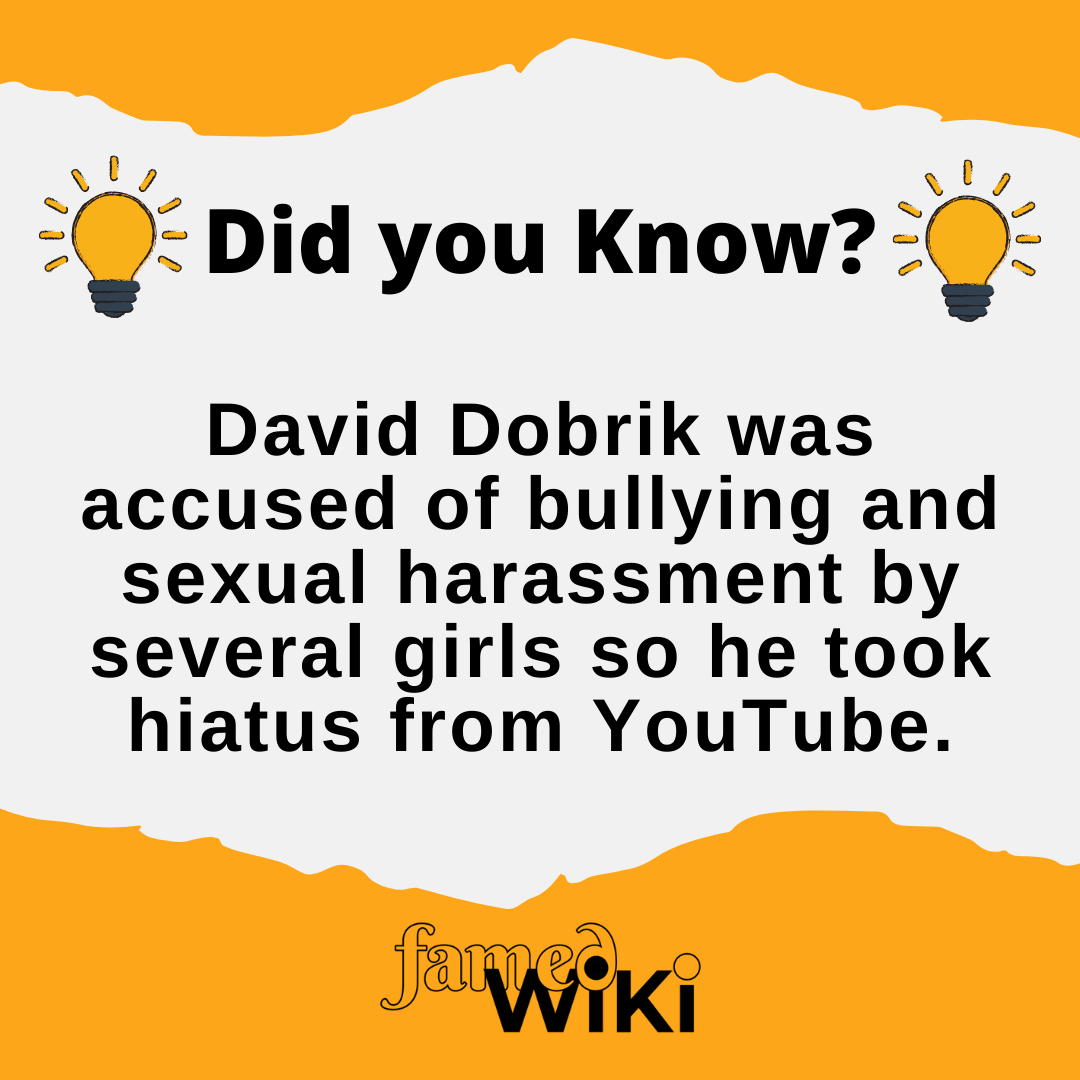 They named their group The Vlog Squad which became the cornerstone of YouTube vlogging.

David Dobrik was also the host of “Dodgeball Thunderdome” which was first premiered on the Discovery Channel.

Currently, David Dvorak is one of the prominent YouTubers in 2021, and his channel is his fifth most-watched youtube channel in the YouTube industry.

Dobrik has over 25 million social media followers to date.

Where was David Dobrik born?

David Dobrik was born in Kosice, Slovakia. However, when he was just six years old he and his parents moved to Chicago, Illinois in Vernon Hills.

Growing up he was very passionate about Tennis and even participated in Boys Tennis State Tournaments in 2014.

He came third in the doubles tournaments. However, David did not continue his career in Tennis and instead decided to be a comedian and Vine star.

Why is David Dobrik famous?

He collaborated with other popular social media stars of  Vine such as Gable Hanna, Jason Nash, and many more.

David joined the famous YouTube group “Second Class” before evening joining the YouTube channel. In 2015 he launched his first YouTube channel on his own personal name.

He started posting comedy vlogs, prank videos, and challenge videos with his group, friends, and family.

On his second channel, he started posting bloopers videos, sponsorship ads, and plenty of challenge videos as well.

Dobrik became an insanely popular YouTuber after 2017 with his funny comedy videos and entertaining and high-energy persona as well.

He started doing prank videos, interviews with celebrities, podcasts, amazing vlogs, and plenty more content that kept his audience on the edge of their seat.

Dobrik was popular for posting three times a week and a bonus video per week if the video reached its milestones.

In 2018 his channel reached 10 million subscribers and Dobrik was awarded Diamond Play Button.

He was also honored by People Magazine for being the Top 10 Social Media Personalities of 2018 which David claimed was one of his best achievements to date.

He also came into the limelight for making separate Instagram account and using photos from disposable cameras. David clarified the purpose in the interview by W Magazine.

Currently, his channel David Dobrik has just over 18.3 million subscribers. His most-watched video is titled “She Said She would never do it Caught” with over 36 million views”.

What is the height of David Dobrik?

David Dobrik stands at the height of 5 feet 10 inches tall and weighs about 76 kg. His zodiac sign is Leo.

Dobrik has black color hair and dark brown color eyes. He has a bulky body with wide pointy hair.

Dobrik is Slovakian regarding nationality and belongs to mixed ethnicity. He is very passionate about sports especially Tennis.

Dobrik is also really passionate about other sports and also adventure and traveling. He also loves comedy shows and drama movies as well.

Who is David Dobrik dating now?

In early 2015 Dobrik dated a fellow social media model in Liza Koshy. The relationship lasted for more than 3 years before breaking up.

The couple did not reveal the reason for breaking up but acted as a friend even after separation as well.

In 2019, Dobrik got married to the mother of Jason Nash named Lorraine Nash. However, just after one month of marriage they got divorced and separated.

Many fans criticized him for marrying Lorraine for YouTube views and to create controversy.

Why was David Dobrik Canceled?

David Dobrik and his friend Durte Dorm were accused of sexual assault and rape by multiple women during early 2021.

During the video-making process of his YouTUbe channel, an anonymous girl was raped without her consent by Dorm but he and Dobrik accused the girl of manipulation.

Both of the Youtubers were heavily criticized and even their sponsors retracted from their sponsorship. YouTube also demonetized its channels.

David Dobrik returned after three months of YouTube hiatus and have promised to be mature and professional.

However, the critics are still angry about the lack of actions taken against these two guys.

David Dobrik has kept the information regarding his parents private and secretive. His parents raised him in Slovakia and later moved to the USA together.

Regarding siblings, David has two young sisters and one youngest brother as well. His sisters’ name are Ester Dobrik and Sara Dobrik.

David s youngest brother’s name is Toby Dobrik. David has not revealed the career of all of his siblings.

They seem very young in social media and maybe in their elementary school.

David Dobrik is a very popular YouTuber and social media influencer. He has over 18 million YouTube subscribers.

What is the net worth of David Dobrik?

David Dobrik is really popular YouTuber and comedian on social media. He has earned lots of income from his influence.

David has over 40 million social media followers altogether which is his primary source of income as well.

He has tons of sponsors and has also lots of brands who he represents as well.