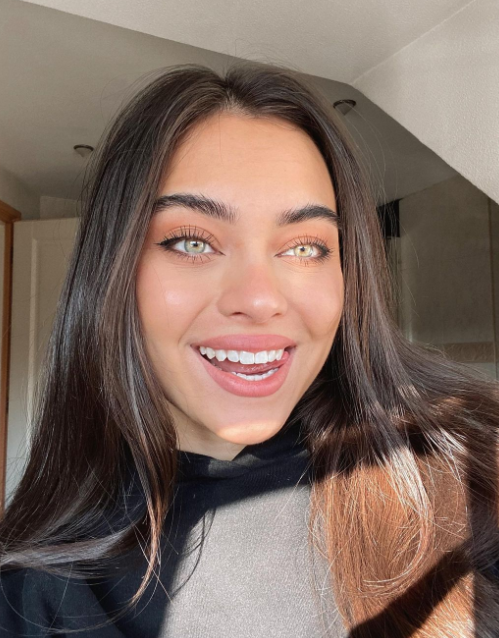 Who is Giorgina Juanita?

Giorgina Juanita (born January 3, 2000) is a popular YouTuber, TikTok Star, and a Model from Netherland. She is popular for making makeup tutorials and reaction videos on her YouTube channel.

Giorgina is also the owner of GigiBeauty. People can buy the merch from her social media pages.

She is a popular model and has performed in lots of fashion weeks and fashion shows.

At just the tender age of 20, she has become a social media sensation all around the world.

She is also hired by various brand products like Iconic London and endorsement companies to use their product.

Furthermore, Giorgina only endorses products that are liked and is healthy for everyone.

Where was Giorgina Juanita born?

Giorgia Juanita was born in the Netherlands. There is not much information regarding her childhood since she has not revealed it anywhere.

Regarding her education, it is understood she has completed high school and wants to pursue a career in modeling.

Other than that she has kept her childhood life private from media and her fans.

Why was Giorgina Juanita famous?

Giorgina started her career as a vine influencer where she used to share dance videos and parody songs since she was 15. She was beautiful and wanted to become a model from an early age.

Giorgina started her TikTok in early 2019 and started to gain attention because of her beautiful face and awesome dance skills.

Her lip-syncing videos and dancing started to grow viral and quite often. Giorgina’s parody verse of LilUzi Two of us went viral and had almost 9 million views.

She also performed lip-syncing of Originalton and that video got over 7.5 million views. Her video started to grow her fame on other social media platforms as well.

After her popularity, she started to give makeup tutorials and lessons on multiple social media platforms along with Instagram and YouTube. Currently, she has over 2 million followers on TikTok.

Giorgina also has over 35 million views on TikTok altogether.

Her first video got just over 20,000 views. But her popularity from Tiktok also paved way for her success on YouTube.

She kept providing makeup tutorials and reaction videos on her YouTube and started to gain more and more fans.

Finally, Giorgina’s viral video came in 2018 when she uploaded her morning routine which got over 1.5 million views. After that, her popularity even rose and she got up to million views quite often.

In April 2020, Giorgina along with her boyfriend established a new makeup brand called Gigibeauy. She has her own product, makeup, and fitness program.

Her fans are very happy and satisfied with the product and are impressed with her entrepreneurship skills.

Giorgina’s beauty product has helped her fashion tutorials even more and many brands are in partnership with her for promotion as well.

What is the height of Giorgina Juanita?

Georgia Juanita has a height of 5 ft 3 inches tall and weighs around 56 kg. She has brown color hair and her eyes are blue in color.

Her zodiac sign is Capricorn. Giorgia is dutch regarding nationality and belongs to white ethnicity. She follows Christianity as her religion.

Giorgina has many hobbies and interests. One of them is dancing and watching romantic videos. She also loves dinner with her family and boyfriend.

Who is Giorgina Juanita dating now?

Georgia Juanita is dating a guy named Gelano Tiamo. He is also an aspiring model and founder of Gigibeauty along with Georgia.

It is unclear when the couple met or fell in love however they frequently appear on each other Instagram posts and images.

Many fans have also seen them hang out together with each other quite often.

Giorgina was raised in the Netherlands by her parents along with her sibling.

Although in interviews she frequently gives credit to her parents for her lifestyle and upbringing, she has not revealed their name or their profession anywhere.

Giorgina also has a younger sister named Macie with whom she is really close. She appears quite often on Giorgina’s Instagram photos and her YouTube and TikTok videos.

Macie is the only sibling of Girogina Juanita.

What is the net worth of Giorgina Juanita?

Giorgina is a very popular social media sensation. She is also an aspiring young and upcoming model from the Netherlands.

Giorgina is very popular all over social media with over 2600,000 followers and fans in all of her social media. She also has her own products called GigiBeauty and other various brand deals such as Iconic London.

Giorgina has generated lots of income and earnings from her career. Her primary source of income is definitely from her social media ads.

However, Giorgina is still very young but already popular. Her opportunities, earnings, and net worth will surely grow over the years.