Who is Kate Box?

Kate Box (born 1978/79) is a popular Australian actress who is acted mostly in theatre, TV, and Movies.

Furthermore, she is most popular for her role in Wentworth and Rake as Lou Kelly and Nicole Vargas respectively.

Apart from her career as an actress, Kate is also equally on the news because of her relationship with actor Jada Alberts.

Alberts and Kate were co-stars in the series Wentworth and were dating since 2013/14. Due to her illustrious career as an actress, Kate has won some prestigious awards as well.

She has won the AACTA award and Equity Award both in her role in the movie Riot where she played the role of Marg McMann.

Where was Kate Box born?

Kate Box was born in Adelaide, Australia, and was raised there as well. Growing up she was very fond of acting and theatre.

Hence she went to Australia’s National Institute of Dramatic Arts also known as NIDA. She got a degree in Performing Arts and acting from the institute.

However, it is unknown where she got her academic degree and where she went for her school education.

Kate Box did not immediately go on to become a Tv or Hollywood Actress. She first started her career as an actress in the theatre and drama industry.

What are Kate Box’s famous movies?

Kate Box started her career as a theater actress in 2004. Her first theatre play as an actress was titled “Helena”.

She received lots of admirable praise for the there drama and it encourages her, even more, to continue her career as an actress.

However, her notable project in the theatre play came in the form of “Top Girls”. The drama helped Kate to receive Helpmann Award as a Best Female supporting actress.

However, her television debut came a year later in 2005. Kate Box introduced herself in the TV show “Small Claims: White Wedding”.

However, Kate Box was finally recognized as one of the most promising actresses for her role in Rake as Nicole Vegas. She also won AACTA Award for her performance in the movie “The Little Death”.

In 2018, Kate Box continued to impress with her amazing acting when she starred in another TV Drama “Riot”.

This time she won the AACTA award for Best Female Performance in TV Drama. Kate Box fulfilled her dream to appear with her partner Jada Alberts in the 2019 TV drama show “Wentworth”.

She was equally praised for her acting on the said TV drama too.

What is the height of Kate Box?

Kate Box stands at the height of 5 ft 8 inches tall and weighs about 52 kg. Box has the zodiac sign of Virgo.

Kate Box has hazel color eyes and her hair color is brown. She is Australian regarding nationality and belongs to the White ethnicity.

Box has not revealed her religion as of yet. Talking about her hobbies and interest she was always fond of acting and theatre. Box also likes movies and is very fond of actors and actresses in the movies.

Her favorite actor is Leonardo Di Caprio whereas her favorite actress is Salma Hayek. Box’s favorite movies are Titanic and Catch Me if You Can. Kate Box also listens to music and admires singer Maddison Beer.

Along with that Kate Box’s hobbies are playing piano, swimming, photography and she also likes to read books which include mostly novels.

Kate Box is married to her Wentworth co-star Jada Alberts. Jada Alberts is also a popular Australian actor and writer.

Along with Wentworth, she has contributed to other movies and TV shows such as Cleverman where he won the prestigious Equity Ensemble Awards.

Kate Box and Jada started dating in mid-2006 when they were acting in a Tv show. However, they were often criticized and humiliated because of their same-sex relationship.

After a couple of years of dating the couple tied the know in 2009 in the presence of a small company of their friends and family.

The couple also got to act together in 2013 for the TV show titled Wentworth. They are very happy living together and now have three small children.

All of their children are less than 10 years old and are living together very happily with each other. 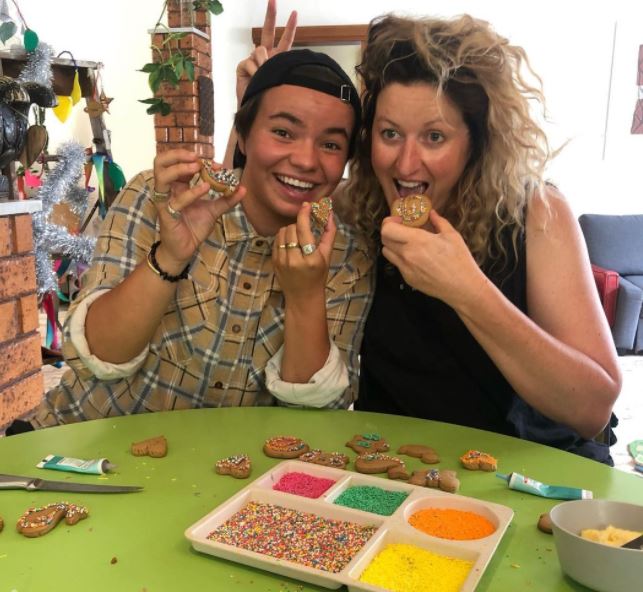 Kate Box is a very private person hence there is not much known about her family. She has not revealed much about her parents and about her siblings.

Maybe she wants to keep her family life very private from the media and from social media as well.

As we all know, the internet can be very daunting and can genuinely breach the privacy of the users. Hence we can understand why Kate Box is not sharing any relevant information regarding her parents.

Similarly, there is not much information regarding her siblings as well. Kate can be protecting the identity of her siblings or she may be the only child of her parents.

As of now, we can clearly assume she has not revealed any information about her parents and does not have any siblings to date.

Despite being a daily popular actress, Kate Box is not quite active on social media. She is currently active on Instagram with over 13,000 followers.

Along with that, she is not quite active on other social media platforms but she does have only 181 followers on Twitter.

What is the Net Worth of Kate Box?

Kate Box is a popular actress who made her name from the TV series Wentworth. Along with that, she has won numerous Best Actress Awards in her career as an actress.

Her primary source of income is from her career as an actress and some very frequent modeling gigs as well.

Currently, in 2021, Kate Box has a net worth of approximately $1 million.