Who is Lisa Vanderpump?

Her full name is Lisa Jane Vanderpump. She was born on 15 September 1960 in London, England.

Currently, she is living in California, United States.

Lisa is famous for her appearance on The Real Housewives of Beverly Hills and Vanderpump Rules.

Also, She was honored with a Golden Palm Star on the Palm Springs Walk of Stars in 2014.

She is a spokesperson for GLAAD and has played an active role in the Trevor Project and has led the annual AIDS Walk, Los Angeles.

In addition, Lisa Vanderpump is an advocate for the local and national LGBT community.

Lisa is an author and designer too.

Today, we will be learning more info about Lisa’s bio, early life, career, net worth, relationship, and many more.

When and where was Lisa Vaderpump born? Lisa Vanderpump was born on 15 September 1960 in London, England.

Currently, she lives in Los Angeles, California. Before California, she lived in Monte Carlo and the South of France.

Regarding her education qualifications, there is no information available.

At the age of nine, she was a full-drama student.

Lisa was an interior designer too. It was her passion.

She started her career in interior design. Lisa has designed various homes, yachts, and all of her own twenty-six bars and restaurants.

Vanderpump owns three more restaurants in California along with her husband.

Also, in 2016 Lisa launched Vandermojis which consists of GIFs, stickers, and audio messages.

Talking more about her business, Lisa has released a line of homewares called The Vanderpump Beverly Hills Collection.

She has authored Simply Divine: A Guide to Easy, Elegant, and Affordable Entertaining in 2011.

Lisa was a full drama student from an early age.

She has appeared in various films, series, and television shows.

Between the years, she has played her role perfectly in various television shows, British series, and movies.

In 2010, Vanderpump portrayed her role in The Real Housewives of Beverly Hills.

Moreover, She was partnered with professional dancer Gleb Savchenko on the 16th season of Dancing with the Stars.

Lisa was featured in many music videos like Poison Arrow and Mantrap.

She was also featured in the music video of Lady Gaga’s G.U.Y in 2014.

In addition, Lisa is an advocate for the local and national LGBT community.

She supports and works for the rights of the LGBT community.

She usually posts her merchandise pictures, promotional pictures, videos, and pictures with friends and family.

Now, Let’s get to know more about Lisa personally. 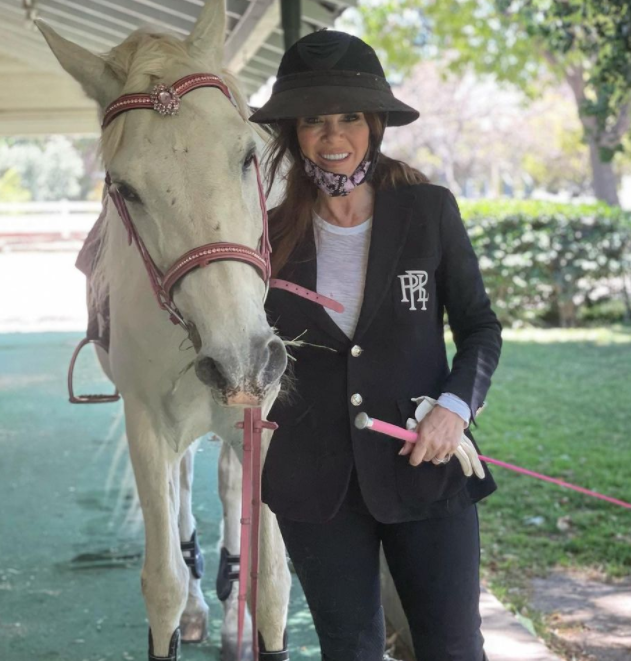 How tall is Lisa Vanderpump? Lisa stands at a height of 5 feet and 5 inches tall.

She weighs around 55 kg. She has black-colored hair with Hazelnut eyes.

Her zodiac sign is Virgo. Currently, she is 61 years old.

Regarding her nationality, she holds British citizenship.

Talking about her ethnicity, she is of German ethnicity.

She follows Christianity and believes in Jesus Christ.

Who is the husband of Lisa Vanderpump? Lisa married Ken Todd in 1982.

The couple got married at United Reformed Church and again got remarried in 2012.

Ken is a former English footballer. The couples are happy as of now.

They both run their restaurants and businesses jointly and together.

Lisa and Ken have two children. Their daughter’s name is Pandora Vanderpump.

Pandora got married to Jason Sabo. The couple also has a son whose name is Max Vanderpump.

Max was adopted when he was a child.

Who are the parents of Lisa Vanderpump? Lisa was born to the Vanderpump family in 1960.

There is no information available regarding her father’s profession.

Also, she lost her mother in 2019 as she died from Deep vein thrombosis.

Lisa had a brother named Mark who also died in 2018 from suicide.

Net Worth of Lisa Vanderpump

What does Lisa Vanderpump do for a living? Lisa is a famous British restaurateur, television personality.

Her main source of income is through her acting career.

Besides these, she owns many restaurants in different cities of England.

In addition, she generates most of her income through hosting shows, brand deals, sponsorships, launching her products, and from other sources too.

Lisa is a successful businesswoman, entrepreneur, and social media personality.

Here are some of the known and unknown facts about Lisa.

Check the video down below from Lisa’s first debut film A touch of class: